The financial capability of Capital Region Water’s City ratepayers frames the balanced priorities of the Program Plan, setting the upper limit of service costs that will be assessed in the next 20 years. 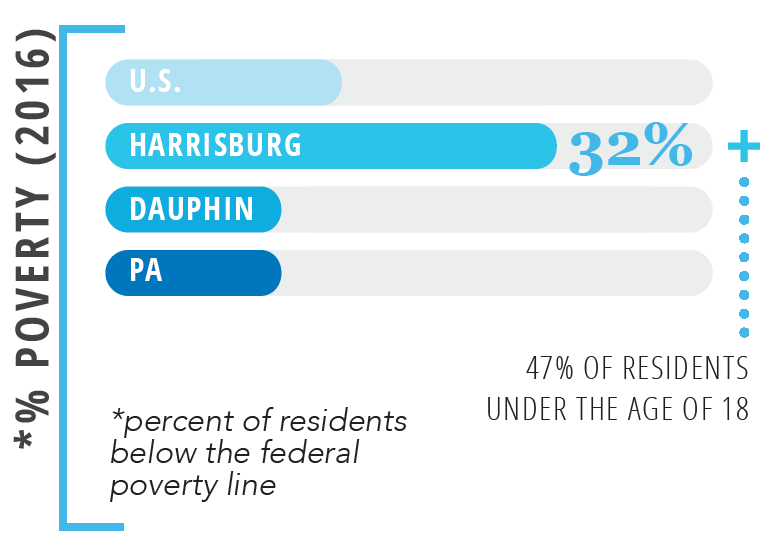 A high financial burden level, according to Federal affordability guidelines, is expected to occur in Harrisburg when approximately $225 million(escalated), or $185 million (in 2017 dollars) of additional capital costs are incurred by CRW over the next ten years. This will require a more than doubling of Capital Region Water’s residential wastewater bills to generate sufficient revenue, from approximately $336 per year to $787 per year over the next 10 years. However, some customers in Harrisburg are already experiencing economic hardship and affordability issues, and these conditions may worsen as capital spending continues, and rates increase in the future.

Capital Region Water has already determined that approximately $113 million (escalated), or $102 million (in 2017 dollars) is required to fund high-priority projects to rehabilitate the Advanced Wastewater Treatment Facility and the conveyance system. This leaves only approximately $112 million (escalated), or $83 million (in 2017 dollars) of additional capital funding capacity over the next 10 years before the level of high financial burden is reached according to Federal guidelines. This is why Capital Region Water is pursuing the maximum amount of schedule relief possible from the US-EPA for Program Plan implementation and why an implementation plan of longer than 20-years is justified.

A 20-year financial analysis concluded that a total of approximately $315 million in capital projects ($253 million in 2017 dollars) could be funded by Capital Region Water over a 20-year period ($225 million in the first 10 years and $90 million in the next) while keeping the affordability threshold at or just below the high financial burden threshold.  A portion of this total 20-year investment will be needed to continue to address decades of deferred maintenance and to preserve system reliability ($214 million), whereas the remaining portion of this capital funding capacity ($101 million) will be available for local, neighborhood, green stormwater infrastructure (GSI) projects. 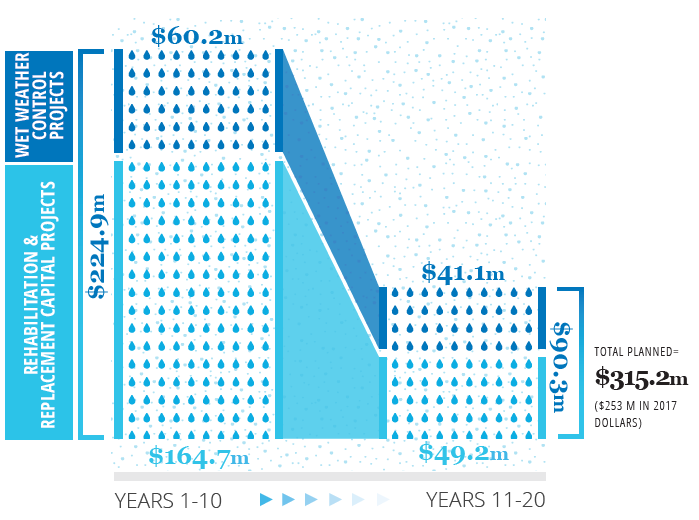 Priorities for implementing these projects will be established annually, based on the findings of the CCTV inspections, the combined sewer overflow (CSO) and/or sewer surcharge reduction benefits gained, and opportunities to incorporate controls into development or public works projects, gaining economies of scale.

Within the affordability framework of the Program Plan, the high-priority activities will address the following problems with our separate and combined wastewater/stormwater collection, conveyance, and treatment systems:

Advanced Wastewater Treatment Facility (AWTF). Recent evaluations reveal that most treatment processes are in fair overall physical condition, but require some capital replacement investments and additional operation and maintenance (O&M) expenditures. Capital Region Water’s estimated cost to accomplish these improvements is $70 million ($61 million in 2017 dollars), which are considered to be a high priority, needed to preserve and enhance existing capacity and minimize the risk of major system failure.