HARRISBURG (November 29, 2018) At its Wednesday, November 28 meeting, Capital Region Water’s Board voted to approve 2019 budgets, including necessary adjustments to water and sewer rates.

“Capital Region Water has and will continue to make prudent financial decisions to reduce costs and limit the burden placed on our customers while investing in the water and wastewater infrastructure essential for everything we do in life from taking a shower to fighting fires,” said CRW Board Chairperson Marc Kurowski. “Large, multi-year investments are needed to address aging infrastructure and a partial consent decree for combined sewer overflows requiring gradual rate increases over time.”

Necessary capital improvements to the drinking water system in 2019 include lining a major water main on Cameron Street, replacing several aging water mains, and an evaluation of the DeHart Dam Spillway. Wastewater capital improvements include updating treatment systems at the Advanced Wastewater Treatment Facility, and repairs to major interceptor sewers along Paxton Creek and the Susquehanna River.

Since 2015, Capital Region Water has proactively identified and repaired leaks in its water distribution system saving $300,000 a year in reduced treatment expenses and improving service reliability. 2018 efficiency improvements at the Advanced Wastewater Treatment Facility will save nearly $100,000 a year in reduced energy and chemical costs.

Capital Region Water continues its emphasis on increasing the involvement of small, local, and diverse businesses on its construction projects and has several business workshops scheduled for January and February in partnership with the City of Harrisburg. In 2018, Capital Region Water’s capital improvement projects included over $5.5 million in commitments to minority, women, and disadvantaged business enterprises (MWDBE).

2019 budgets, rates, and more information about capital projects can be found online at: http://capitalregionwater.com/financialreports

HARRISBURG (October 31, 2018): Capital Region Water announced today that it completed its backup water supply exercise and switched back to supplying its water solely from the DeHart Reservoir on Sunday, October 28.

For most customers, it will take five to nine days for drinking water in the distribution system (underground pipes) to fully transition to water treated from the DeHart Reservoir.

This exercise is an industry best practice to ensure reliability during a potential emergency and will be conducted again in October 2019. As previously announced, Capital Region Water began temporarily pumping and treating water from its backup water source, the Susquehanna River on October 16.

HARRISBURG (October 4, 2018): Following industry best practices, Capital Region Water will test its backup water supply, using an intake in the Susquehanna River, to ensure its functionality and reliability in the event needed during a potential emergency.  Capital Region Water’s main source of drinking water is the DeHart Reservoir in northern Dauphin County. 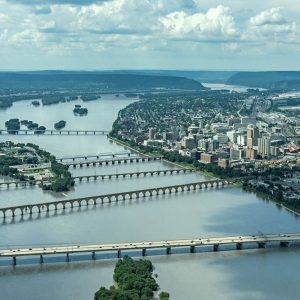 This temporary exercise will begin in mid-October and last at least ten days before switching back to the DeHart Reservoir supply. Water quality will continue to be compliant with all state and federal standards.

“We’re lucky to have the pristine DeHart Reservoir as our main source of drinking water but we also benefit from having the infrastructure in place to treat water from the Susquehanna River if needed,” said Capital Region Water Board Chairperson Marc Kurowski. “As part of Capital Region Water’s ongoing efforts to ensure reliable service, this annual exercise will make sure our equipment and staff are thoroughly prepared if an emergency ever required the switch to our backup water source.  Although we expect very minimal impact to our customers, Capital Region Water feels that our customers deserve to know when we make temporary changes to the source of our water supply.”

Capital Region Water’s water treatment plant can treat water from either the DeHart Reservoir during typical conditions or from the Susquehanna River during emergencies. The water treatment plant, called the Robert E. Young Water Services Center, was constructed in 1994 and currently treats about 7 million gallons of drinking water per day for customers in the City of Harrisburg and parts of Penbrook Borough, and Lower Paxton, Susquehanna, and Swatara Townships.

There will be no change in water pressure or the appearance of the water. People with sensitive palates may experience a slightly different taste to their drinking water during this exercise.

Capital Region Water will provide additional updates, including start and end dates for the exercise on its website and social media pages.  Customers with questions can contact Capital Region Water by phone at 888-510-0606 or by email at info@capitalregionwater.com. 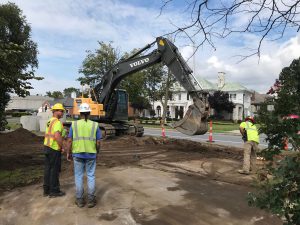 HARRISBURG (September 10, 2018): Capital Region Water kicked off a $1,170,000 project to rehabilitate a section of the Front Street Sewer Interceptor in Riverfront Park between Shamokin and Emerald streets in Harrisburg.

The 105-year-old Front Street Sewer Interceptor carries an average of 2 million gallons of wastewater every day from the City of Harrisburg and Susquehanna Township.

“Capital Region Water is committed to protecting public safety and the environment by properly maintaining our wastewater collection system,” said Capital Region Water Board Chairperson Marc Kurowski. “We appreciate everyone’s patience during construction while we address critical and aging infrastructure.”

This project will install 2,000 feet of new pipe liner, called “cured-in-place” pipe, to rehabilitate the 30-inch diameter clay sewer pipe. Cured-in-place pipe technology decreases the need for excavation and will be installed through manholes between Shamokin Street and Emerald Street in Riverfront Park along Front Street. Aboveground pipes will be placed along the park in the project area to bypass flows during the cured-in-place pipe installation.

HARRISBURG (August 30, 2018): Capital Region Water will begin an infrastructure improvement project to repair two sewer mains in Market Street between Cameron Street and 13th Street. This high priority project will require road closures in the area from now through November.

Traffic will be detoured to Paxton Street.   Detour details will be posted and can be viewed on Capital Region Water’s website, Nextdoor.com and Twitter.  The sidewalks on Market Street will be open to pedestrian traffic.

If you have any questions call Capital Region Water at 888-510-0606 or email info@capitalregionwater.com. Thank you for your patience while we invest in our community.

HARRISBURG (August 28, 2018): With a focus on operational excellence, Capital Region Water announces the addition of a new Director of Administration and the promotion of two employees to the Director level for its Water and Wastewater Operations. 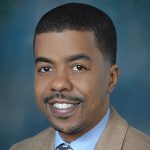 Michael Doweary joins Capital Region Water as Director of Administration. Michael most recently served as Business Administrator for the City of York where he oversaw the fiscal and administrative functions of the City and was recognized for improving the City’s credit rating during his tenure. He will oversee Capital Region Water’s administrative functions including Human Resources, Risk Management, and Business Diversity.

“It’s part of Capital Region Water’s mission to continually improve the performance, efficiency, and safety of our operations,” said Capital Region Water Board Chairperson Marc Kurowski. “Michael brings over 15 years of leadership experience to support this mission and lead our administrative efforts.” 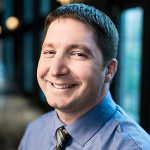 In related news, Jess Rosentel has been promoted to Director of Wastewater Operations after serving as Wastewater Superintendent for four years. Jess has over 14 years of experience in the wastewater industry and successfully implemented over $50 million of improvements to Capital Region Water’s Advanced Wastewater Treatment Facility. He oversees the operation of Capital Region Water’s wastewater system serving 120,000 people in the Harrisburg area, including the largest wastewater treatment plant in Pennsylvania within the Chesapeake Bay watershed. 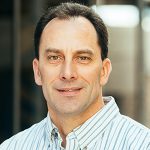 In addition, Michael McFadden has been promoted to Director of Water Operations after serving as Water Superintendent for three years. Michael has over 20 years of experience in the water utility industry and recently instituted a leak detection program which saves an average of 1,400,000 gallons of water every day.  He oversees the operation of Capital Region Water’s drinking water system which serves 60,000 people. The water system includes the DeHart Reservoir, a treatment plant capable of treating 20 million gallons of water per day, and over 200 miles of distribution mains.

“At Capital Region Water, we value the contributions that our employees make toward operational excellence and pride in our work,” said Capital Region Water CEO Mark Kropilak. “Jess and Michael are trusted leaders within the organization and have proven themselves capable of leading and expanding our operations.”

Capital Region Water is a municipal authority providing drinking water, wastewater, and stormwater services to 120,000 residents in the City of Harrisburg and surrounding area. Visit capitalregionwater.com for more information.

“After a comprehensive search process, Mark impressed the Board with his 30 years of experience in the water industry and understanding of complex issues facing Capital Region Water, including infrastructure investments, regulatory mandates, and utility resilience,” said Board Chairperson Marc Kurowski. “He is capable of taking these issues head-on in the most efficient manner to best serve our customers.”

Mark has served as CEO and Board Advisor to various water technology companies. He was General Counsel for a regulated water and wastewater utility where he was a thought leader on matters of growth strategy and regulatory and legislative policies. Mark has also served as Senior Vice President of Business Development at several major water companies, where he focused on infrastructure investments, operational efficiency, utility valuation, and acquisitions.

“It is an honor to be selected CEO of Capital Region Water,” said Mr. Kropilak. “I have joined a team of employees dedicated to providing high quality water, superior customer service, and operational excellence.”

Mark received his law degree from Columbia University, an EMBA from Villanova University, and a BA degree in Economics and Accounting from Saint Vincent College.

The drinking water quality Capital Region Water supplied in 2017 exceeded all state and federal drinking water standards.  Customers can access the report online by visiting capitalregionwater.com/2018waterqualityreport, or they can request a copy to be mailed to them by calling 888-510-0606.

Why is this needed?
Annual fire hydrant flushing and inspections are vital to maintaining high quality drinking water. Flushing removes buildup in fire hydrants and water mains while hydrant inspections ensure reliable use for fire protection.

How will this affect customers’ water service?
Fire hydrant flushing may cause a temporary discoloration of water and a temporary reduction in water pressure. The discoloration is not harmful and can be flushed out by running cold water through a faucet. Check for discolored water before doing laundry when crews are flushing nearby. Customers can call 888-510-0606 or email info@capitalregionwater.com with any questions.

Public Notification:
Capital Region Water will be using an automated phone system, Nextdoor.com, and Twitter to notify customers as the flushing program progresses. Customers can sign up to receive automated messages about hydrant flushing by subscribing to “Service Alerts” at capitalregionwater.com/alerts or by calling Capital Region Water at 888-510-0606.
More information can be found at capitalregionwater.com/hydrantflushing.